On January 13, 1868 an organizational meeting was held in the lecture room of the Presbyterian Church in Westfield in order to establish an appropriate burial facility other than the crowded churchyard cemetery.  Pursuant to the act entitled: “An Act authorizing the incorporation of Rural Cemetery Associations”, the Fairview Cemetery Association was formed.
The corporate name chosen was “Fairview Cemetery”. 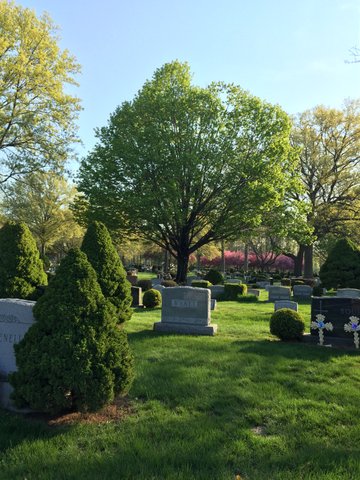 The original cemetery property consisted of 17 acres and was purchased from Mr. John R. Miller from an elevation of land long known in those days as “Mount Pleasant”. At the time it commanded a view of the surrounding County for many miles in every direction. The grounds were located on the “Public Road” (now East Broad Street) about one and a half miles distant from the railroad stations of Westfield and Cranford.  The site was deemed as the most desirable in the State with its rolling hills, and dry soil suitable to burial purposes.

Ownership of Fairview was vested in the lot holders. Each lot purchased carried with it a voting right for officers and ownership in all lands unsold.

Fairview cemetery was solemnly dedicated on September 24, 1868. Initial drives were laid out, a receiving vault was built and a “Lodge” with a chapel was constructed. By the turn of the century the cemetery had increased in size to 75 acres through the purchase of neighboring farmlands.

To develop the newly acquired land, topographical maps and a detailed engineering plan were needed.  There were many interviews with various engineers and information was received from well known cemeteries, such as Greenwood in Brooklyn and Woodlawn of New York.

By the end of 1902 the firm of Jacob L. Bauer of Elizabeth was selected to provide topographical maps and the firm of F.B. Ham of Cranford was selected to perform the engineering work necessary for a general plan showing roads, paths, drives and general divisions with drainage of water. It is interesting to note that during this period the Firm of Downing, Vaux, Landscape Architect, NY was consulted. Downing Vaux was a predecessor of the Olmsted Brothers Firm. Correspondence also shows that in 1926 the then Olmsted Brothers Firm was again contacted for design landscaping services and visited the Cemetery.  Although the Olmsted involvement was limited, Fairview is included in The Master List of design projects of the Olmsted Firm 1857-1950 by the National Association of Olmsted Parks.  The Fairview project consisted of two plans and drawing, 1902-1904.

Whatever the origins, the designed landscape features of Fairview Cemetery reinforce the strengths of the original site.  The curving drives form a network that join with the natural topographic surroundings and provide a natural arborous setting.  The thoughtful selection of the species of trees compliment the design and give a unique overall effect of beauty and serenity.

The main concern of the plan was to locate future roads, establish size and configuration of the burial sections, and to locate and design future facilities for the cemetery. 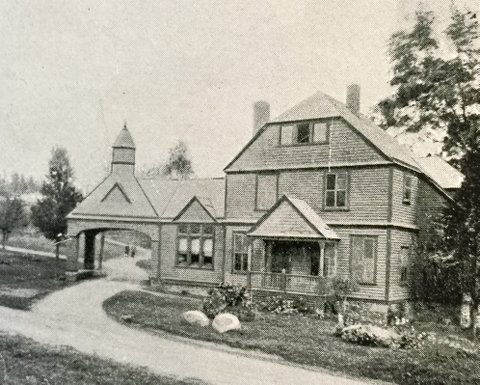 In the center of the site was a unique facility in the form of a drainage retention pond for the local community.  It is unique in the fact that it does not serve the limited needs of the cemetery, but rather the extensive needs of the upstream and downstream community within the watershed.  The pond has become the striking feature of this section of the cemetery.  In 1983 it was dredged, a surrounding wall was built and aerating fountains were purchased with a generous donation.  The pond was named “Bunnell Pond” after Arthur Bunnell, President of the Board of Trustees from 1968-1975.  The Bunnell Pond has become a centerpiece of the cemetery.

Fairview Cemetery was accepted as a member of the American Public Gardens Association (APGA) in 2002 following the dedicated work of Dr. Thomas Ombrello, Professor of Biology at Union County College.  He steadfastly worked with his students to catalogue and inventory over 60 species of trees within the cemetery to apply for and receive Arboretum status. The number of catalogued trees is now 99 species.

Perhaps people do not associate the word garden with the word cemetery, but historically, cemeteries have been places of beauty and nature, which offer respite and tranquility to their communities.  While there are few cemeteries that qualify as an arboretum, Fairview has this distinction. Other New Jersey arboreta include Duke Farms, Morven Gardens and Reeves-Reed to name a few.

In the military section of Fairview Cemetery is a very old cannon known as “Old One Horn”. Its affectionate name derives from its missing right mounting “Horn” which is broken off.  There are several interesting tales of its history from Revolutionary times, but the cannon’s exact history from the period is unclear.  Its origins are further clouded in that our “Old One Horn” apparently went missing for a time in the 19th century as young men of Westfield, Scotch Plains, Plainfield, Rahway and New Market were stealing relic guns back and forth to use for the 4th of July.  It was presumably found in a pond and returned to Fairview.  “Old one Horn” was set in concrete on Decoration Day (Memorial Day) in 1899 where it remains today as an interesting old relic. 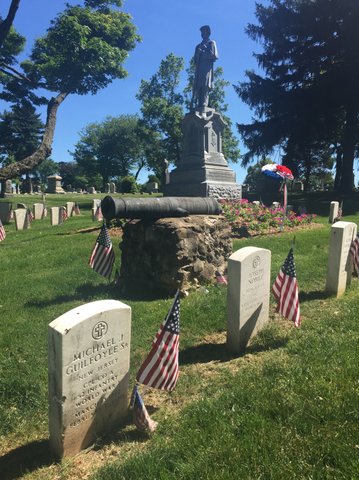 Also resting among the military graves of the cemetery is a civil war monument erected by the Winfield Scott Post No.73 in 1889. It is a 7 foot tall white bronze American soldier which depicts a union infantryman standing at parade rest with both hands around the rifle barrel atop a multi tiered white bronze base.

The Fairview grounds also have a matched pair of 1870 Dahlgren Naval Howitzer Cannons.  They are mounted on field carriages with iron wheels and give an additional historic presence to their sacred place.

It is fitting that on Memorial Day the military section is the location for the closing ceremonies of the Town of Westfield’s only parade. There are several alternative interment options available at Fairview. The first niches were built in 1990 as a columbarium. There are now a total of five. 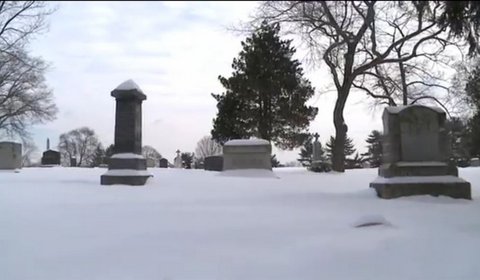 Because of family interest in crypts, the first mausoleum, Mausoleum I, was built in 1996. A second mausoleum, Willow View, was built in 2003.  A third mausoleum, Pond View was completed in 2019. These structures serenely blend with nearby Bunnell Pond and its surroundings.  An additional mausoleum is planned in the area.

The initial “Lodge” now serving as the administrative office, and the neighboring “Barn” structures underwent complete renovation beginning in 2012.  Both buildings were well over 100 years old. The office renovation provided modern facilities for record preservation and a gathering room, formerly the old chapel.  The gathering room is equipped with the technologies for memorial services.

Since its founding in 1868 Fairview has faithfully served families with care, dignity and compassion. Its design blends exceptionally well with the natural landscape and its beautiful arboretum assemblage.

Fairview commemorates its history and service to the community with its sesquicentennial in 2018.